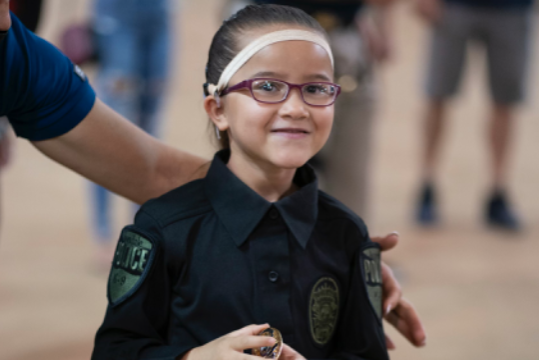 In the summer of 2018 Avondale Police Department Officer Wagner and Officer Turitto came into contact with 5-year-old (at the time) Ana while patrolling in a well-known area where stolen vehicles are abandoned. Officers Wagner and Officer Turitto located a vehicle in a field, and after further investigation both officers found Ana along with her siblings in the vehicle with no AC and no cover in the middle of an extremely hot summer day. It was obvious that Ana and her siblings had been neglected and were in need of medical care. An investigation began for child neglect and child abuse and during this investigation it was found that Ana had not been receiving any care for her disabilities. She also had not received any resources for any of her developmental conditions. Ana was unable to communicate as she was hearing impaired, legally deaf, and was not even able to communicate through sign language due to her lack of support for her development. Her biological mother had a drug dependency and was unfit to care for her or her siblings. Ana had various disabilities that will continue to progress as she grows to the point where she will be completely blind and may lose the ability to hear.

In 2021, Ana was named honorary K9 Handler for the 18th Annual Desert Dog K9 Trials. Ana has dreams of being a police officer and more specifically a K9 Handler.

Through the assistance of her new family, Ana is now enrolled in the best available schools and receiving the best medical care available. Ana has been able to receive a “Cochlear Hearing Implant” to help her hear better and improve her quality of life.

Unfortunately, in 2020 Ana was diagnosed with Ushers Syndrome which will cost her the ability to see and hear at such a young age. As she struggles through numerous therapies from learning how to walk with a cane, learning to read brail, and speech therapy, Officer Wagner has been by her side for support.

As Ana's vision continues to deteriorate, we would love to come together as a community to send her and her family to Disneyland before she loses her sight completely. Please help us in our campaign to show this wonderful little girl the most Magical Place on Earth!

NEP IS A UNION WORKPLACE!
PROUD MEMBER OF CWA L-9003